Stronger by a Mile 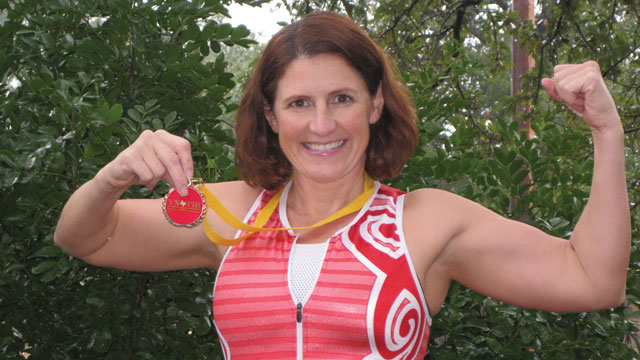 Mindy Russell had no idea that by getting in shape and completing her first triathlon, she’d inspire her husband and kids to get moving, too.

When Mindy Russell began training for her first triathlon in 2008, she was looking to lose the weight she’d gained since becoming a parent. Russell, 39, had packed 45 extra pounds onto her 5-foot-4-inch frame since her oldest child, Cadence, was born in 2003. “For a long time, I played the denial game,” she says. “I don’t think you realize what’s happening because you’re so busy and tired.”

Russell not only finished that first tri event, she went on to complete 12 others. In the process, she got back to her pre-pregnancy weight, and inspired her husband, Eric, and their three children to become more active as well. Today, the Russells, of Austin, Texas, spend their time together hiking, biking and swimming. Last summer, Eric and Cadence started doing triathlons, too.

Surprisingly, Russell never anticipated her training would influence those around her. “When I first started doing this, it was about doing something for myself, not about setting an example for my family,” she says.  But now, she says, seeing her loved ones get excited about exercise is all the more reason to continue. “Unless you’re doing something healthy that makes you happy, your kids aren’t going to learn those habits, either.”

From childhood through her late 20s, Russell was a jock. In high school, she competed on the volleyball, basketball, softball, track and swim teams. In college, she dabbled in intramural and club sports; and later, she and Eric played in co-ed softball and sand volleyball leagues.

Then came marriage, motherhood and work. On top of parenting responsibilities, Russell’s job as a marketing manager kept her at the office for long hours. Her exercise regimen dwindled to occasional walks around the block. The result: Russell and her family paid little attention to what they were eating. She ignored portion sizes and continued to eat even when she was full.

“I just figured, ‘Why work at it when I’m going to have another kid?’” she says. “It was justification for why I wasn’t working out.”

By summer of 2007, Russell’s weight had climbed to 180 pounds. “I remember seeing a picture and thinking, ‘That can’t possibly be me.’ I had spent almost five years taking care of these little people and not taking care of myself.”

When a new health club opened near her home in October 2007, it was Russell’s cue to take action. Recalling her high school swim days, she hoped the pool would help her jump-start a workout routine.

Although she began by swimming 20 laps most mornings at the South Austin Life Time club, she wasn’t sure how long she could maintain her momentum. When a friend suggested that she train for a triathlon, she knew it would be a perfect goal.

“Having grown up as an athlete, I’m a pretty competitive person. I like to do things to see if I can do them,” Russell says. She set her sights on the Danskin Women’s Triathlon in Austin in May 2008, an 800-meter swim, 12-mile bike and 3.1-mile run.

For the next six months, Russell committed to five days a week of training, which included swimming, cycling and run-walking on the treadmill. In February, she participated in the Life Time Fitness Indoor Triathlon (pool,  cycle machine, treadmill) as a trial run.

There was just one problem: Russell hadn’t pedaled a real bicycle since she was about 15. It wasn’t until a month before the triathlon that she bought herself a road bike, and a friend gave her a crash course in shifting gears and climbing hills. “It was nerve-racking,” she says.

But cross the finish line she did — 25 pounds lighter than her pre-training weight. “I was exhausted, but it was a lot of fun,” she says.

Russell continued to compete in triathlons, including two Olympic-distance events and four others in which she earned top-three honors for her age group. In January 2010, she ran her first half-marathon.

It was around then that Cadence made an announcement. “She said, ‘Mommy, I want to do what you do. I want to race.’ That was the first time I knew my kids were paying attention,” says Russell.

So she enrolled her daughter on a local swim team. Come June, Cadence participated in the IronKids Triathlon in Round Rock, Texas, which, for her age group, means a 50-yard swim, 2-mile bike and 500-yard run. She had a blast. “It made me feel proud,” says Cadence. “I like the biking and swimming, and there are a million people around.”

This time, Cadence was the inspiration in the family. Eric had been keeping a distance from triathlons because of his inability to swim. Now that his 7-year-old was gliding along, the fear factor started to fade. “Just seeing her swim the 50-meter free — which I couldn’t do — was a humbling experience,” Eric says. “That just broke down the ‘I-can’t-swim’ barrier for me.”

After a few weeks of practice in the pool, Eric completed a family triathlon with Cadence last July. These days, he does 1,000-meter swim workouts weekly.

Even the youngest Russells have jumped on the bandwagon: Mason, 6, and Reid, 4, completed a 1.5-mile kids’ fun run last September; Mason is planning to join the local swim team; and all three children play soccer. Kickball with Mom is an after-school ritual.

Being active has led Russell to make more conscious, nutritionally sound food choices. For example, she’s traded in white bread for whole-grain varieties, adds real milk instead of processed creamer to her coffee, and serves fruits and veggies with her family’s meals. Recently, she started adding shredded carrots to spaghetti sauce. “I eat more whole foods now — more natural things and not as much sugar,” she says. As for portion control, Russell serves herself dinner on a salad plate to avoid overeating.

Russell and her husband also make the effort to explain to their children why they benefit from eating certain things and not others. “It makes us seem less mean in their eyes, and hopefully will help them make better eating decisions in the future,” she says.

Exercising and eating right have become second nature for the Russell family. “I don’t think Mindy was trying to set an example when she started doing this, but it’s been a great side benefit for the whole family,” says Eric. “We’re all much better off for it.”

Nicole Radziszewski is a personal trainer and writer in the Chicago area.

Big Inspiration: Self-competition. “I like competing against myself. There’s always some way to improve.”

What Worked: Changing her routine. “I hit a point where I stayed the same weight for months, no matter what I did,” Russell says. In June 2010, she joined a Masters Swimming class, and dropped 7 pounds in six weeks.

What Didn’t Work: Lacking a clear focus and firm commitment to her goals.

Words of Wisdom: “It’s easier to get started when you give yourself a specific goal or commit to an athletic event. Put it down on your calendar. Good things will follow.

This 2,400-meter swim workout helped Russell break through a weight-loss plateau. The routine is from Hayley McGregory, coach of the Masters Swimming program at Life Time South Austin and a former USA Swimming competitor. Russell does a swim workout of this length twice a week, using a combination of strokes.