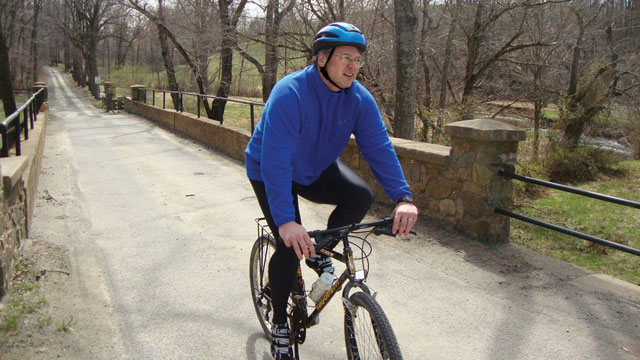 It took a cancer diagnosis to convince Brad Dawson to rethink his eating and exercise habits. Then he discovered a more positive source of motivation -feeling great.

Brad Dawson once ran laps in a rubber tracksuit to make weight for his high school wrestling team. In his late 20s, he trained six days a week for an Olympic-distance triathlon. Eventually, though, family and work responsibilities shifted his priorities. As time passed, his motivation to stay fit dwindled: By age 50, the former athlete’s weight peaked at 296 pounds.

Dawson had lost track of his fitness goals. “If I don’t have my next objective ready, I take the easy route,” says the business consultant from Catharpin, Va. “The pants get a little tighter, and you finally just break down and buy another pair.”

In November 2009, just weeks after his 50th birthday, Dawson’s easy route hit an unexpected detour: He was diagnosed with prostate cancer. His doctors said he would need surgery to remove his prostate. First, though, he was told that he needed to lose some weight.

What surprised him was how much he needed to drop. Says Dawson: “When the doctor asked what I weighed, I said, ‘probably 265.’ He said I needed to get down to 235 before I could have the surgery. Little did I know I actually weighed 296. There was no way I could lose 60 pounds in 12 weeks, so I told him I was going to lose 50.”

Dawson knew this would mean suddenly abandoning the poor lifestyle habits he’d grown accustomed to over the years. Of course, staying healthy would require making healthier choices for a lifetime — but initially, Dawson wasn’t thinking that far ahead. He was just trying to negotiate a crisis that had been creeping up on him for decades, one sedentary day at a time.

As a 29-year-old triathlete, the 6-foot-1-inch Dawson had been in great shape. He weighed 200 pounds and had a resting heart rate in the 40s. But, after getting married and starting his family, Dawson abandoned his interest in competitve events and lost the motivation to exercise. “I’d work out hard once a week or every couple of weeks, with no real effort or goals,” he says.

There was another problem, Dawson knew: “I was eating far more than a normal person would eat.” At dinner he’d load up on empty carbohydrates, such as pasta and white rice. Dinner usually included dessert. Both he and his wife, Svetlana, enjoyed going to fine restaurants, where Dawson would overindulge in more rich foods and wine.

“I recognized that I was getting bigger, but it was a ‘Hey, I’ll start tomorrow,’ kind of thing,” says Dawson.

Man on a Mission

Dawson says his cancer diagnosis didn’t come as a surprise. Because both his father and brother had already undergone the same radical prostatectomy, it was, he says, a matter of “not if, but when.” The diagnosis gave him a couple of very immediate goals: Lose 50 pounds by Jan. 20, 2010, and beat cancer.

From the moment Dawson left Johns Hopkins Hospital in Baltimore, he made his intentions clear. He told his family, friends and clients of his goal, prompting their support. “Knowing that I had a cheering crowd was very helpful,” he says.

Dawson was relentless. He suspended new projects at work and hit the gym most mornings for an hour of cardio and an hour of strength training. Some days, he went twice. After five to six days of exercise, he took a day off to recover if he had lost weight that week.

His regimen was extreme — some might say obsessive — but his surgery couldn’t wait. “Brad was very focused and dedicated to meeting milestones,” says Ken Logerwell, a friend who joined him three days a week to lift weights.

The diet was easier to follow than he’d expected, because in his mind — at least initially — it felt temporary. “I knew that on Jan. 20 I was going into surgery, and come Jan. 21, I could eat whatever I wanted.”

When Dawson showed up for surgery he weighed 245 pounds. The procedure was successful, and his recovery quick. But now what?

“After surgery, the joke in my family was, ‘How quickly will he put the weight back on?’” he says. But the former triathlete had an idea: “I looked in my garage and thought, ‘You’ve got three nice bikes here. Let’s rehab ’em and start riding.’”

In March, Dawson began cycling with the goal of completing a “century” (a 100-mile ride) that summer. In the meantime, he came up with a more creative, long-term goal. Northern Virginia boasts 55 wineries, all within 60 miles of Dawson’s home. The longtime wine enthusiast decided to visit all of them on his bike.

Since July 2010, he’s hit nine of them, chronicling his adventures on his blog, The Wining Cyclist (https://thewiningcyclist.wordpress.com). Dawson’s quest reminds him that he can enjoy life’s indulgences without sacrificing his health.

And that century ride? Dawson completed the Reston Century 105-miler last August. He’s prepared for more centuries and winery trips this summer, thanks to winter cycling classes at his gym.

Ultimately, Dawson decided to hang on to the gifts his presurgery lifestyle changes had brought him. He still eats healthy salads for lunch and dinner, and he’s actually enjoying them. “Something you think would be constricting becomes a normal part of life,” he says. He admits to indulging on occasion, like when he visited family in Moscow last winter. Still, his typical diet is heavy on veggies and protein, and light on sweets.

“I’m really proud of him,” Svetlana says. “He always enjoyed physical activity, but he enjoyed eating more. Now he understands he can do both.”

Big Achievements: Losing 51 pounds in 12 weeks; maintaining his weight and new, healthy lifestyle for more than a year.

What Worked: Having measurable, attainable, action-oriented goals with firm deadlines.

What Didn’t Work: Workouts with no purpose other than to burn calories. “You get up on a StairMaster and you’re going nowhere. You might as well be in jail.”

Words of Wisdom: “As you practice, you ingrain a lot of behaviors. You may still stray off the path occasionally, but now you know how to get back on it.”

Brad Dawson’s ideal workout is one with a clear destination (like his cycling wine tours). “The philosophy is, ‘How can you take something like walking or swimming and give it more purpose?’” he asks. “To me, that’s the fun of what I do.” Here’s Dawson’s recipe for creating your own destination-oriented workout.

1. Select a fitness activity that can take you from point A to point B, such as biking, running or inline skating.

2. Choose a specific destination that you can reach by your preferred mode of transportation.

3. Give your trip a greater purpose: Are you going to discover something new? Visit a friend? Enjoy a scenic vista?

4. Keep track of your journeys. Start a blog or a journal. Record what you see and how you feel.