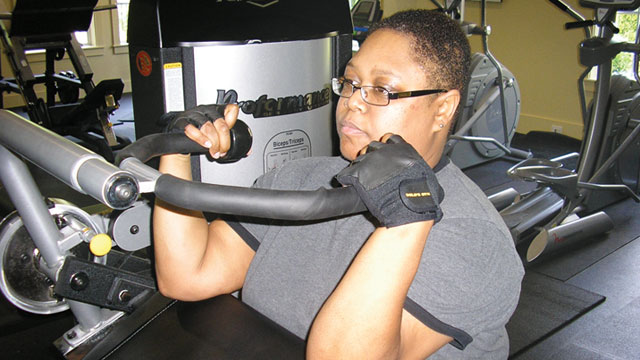 On her 40th birthday, Shonia Brown got a wake-up call that convinced her to change her life – and face her challenges head on.

Shonia Brown could list plenty of reasons why she was overweight two years ago: Her mother’s death to ­cancer, an ongoing battle with depression and various other health problems. Today, Brown is less interested in offering excuses than in taking personal responsibility for her well-being. “Nobody is going to come to your rescue,” says the 42-year-old technical writer from Atlanta. “It’s got to be you.”

Brown is the first to admit that she spent years blaming her poor physical condition on her circumstances. And the realization that she had the power to change her situation didn’t come a moment too soon: She was out of work, weighed 245 pounds and was fast giving up on life.

Brown knew she was hitting bottom — but it took a while for her to accept that whether or not she bounced back was entirely up to her.

From a very young age, Brown associated food with comfort. Because her mother, Dorothy, worked two jobs, they didn’t have a lot of time together. Their shared quality time was often spent grabbing fast-food meals or vegging out on the couch with sweets. “I remember going to a bakery in downtown Atlanta every Saturday and buying a whole coconut cake and chocolate cake,” says Brown. “By the end of the weekend, we had finished them.”

In her sophomore year of high school, the 5-foot-5-inch Brown weighed 210 pounds and had developed hypertension. She tried to eat better, but with no healthy food at home, it was a challenge, to say the least. Despite her doctor’s recommendation to exercise, she was too embarrassed to do so. “I was ashamed of how I looked in shorts and that I couldn’t keep up with the other kids,” she says.

Brown also felt weighed down by her mother’s stress of being a single parent. “Growing up, I did anything I could to emotionally support her,” she says.

Shortly after Brown began college at Georgia State University, she started dating, which created tension between her and her mother. “She had grown accustomed to me as her companion,” Brown says. “For the first time in my life, I was living for myself.”

Plagued by guilt and low self-esteem, Brown’s battle with depression took hold. She saw therapists, but made little progress. For the next 15 years, she sought comfort in food as her health slowly spiraled out of control.

When Brown was in her mid-30s and working as a technical writer for a pharmaceutical software company, she began a serious relationship with Tracy Griggs, a healthcare and municipalities appraiser. Although being in a committed relationship brought Brown joy, it also caused additional strain between her and her mother; after a family disagreement, they became further estranged.

But when her mom was diagnosed with pancreatic cancer in June 2007, Brown became her caretaker. “She was my mom and I loved her, but it was tough, because although she was sick, she had the same mentality she had her whole life: It was expectation, not appreciation, for me to be there,” says Brown. She received little support from other family members.

After Dorothy died in September 2008, Brown severed ties with much of her extended family. As her depressive moods worsened, her friendships eroded. Brown was convinced that she couldn’t keep on giving to others without support in return.

“When people started to see that I was no longer the Shonia who would do your errands, come to your event, give you money, they were gone,” she says.

It was a tough time for Griggs, too. Still, she was determined to be Brown’s emotional pillar. “I tried to keep upbeat, but sometimes you just need to listen,” she says.
Along with her emotional struggles, Brown was suffering physically — from irritable bowel syndrome, lactose intolerance and acid reflux. As her anxiety and eating habits worsened, symptoms flared up. “I just couldn’t get it together,” Brown says.

In February 2009, depleted and ill, Brown took a medical leave of absence from her job. Still, her mental and physical conditions kept deteriorating. “I kept feeling sorry for myself and hoping someone would care,” she says. When Brown’s leave expired in April, she was terminated from her job because she wasn’t ready to return. Shortly after, Griggs was laid off from her job.

It was on Brown’s 40th birthday, July 12, 2009, that she hit rock bottom. When no friends called to wish her a happy birthday, she became disheartened. Brown took her anger out on Griggs, saying she should have reminded friends of her birthday. As it turned out, Griggs had.

Frustrated, Griggs shared with Brown a friend’s harsh response to her phone call: “Everyone has problems. Shonia’s not the only one.” Although those were  tough words to hear, Brown says she knew it was a dose of the truth, and exactly what she needed.

“I realized that all you have is you,” says Brown. “I made the decision that day to let go of the expectation that people were going to help me and instead rely on my own efforts.” It was the best birthday gift she could have received.

From that day on, Brown gradually started taking control of her health. She gave up dairy and soda and began limiting her sugar and meat intake. She joined her local Life Time Fitness, dabbled in Tony Horton’s P90X program, and put more effort into therapy.

But the real, more rapid change began after Brown started a new job as a technical writer, which required regular travel to Dayton, Ohio, for the first five months. On these business trips, she took along her exercise videos and used the hotel’s gym. “I started really enjoying the workouts, especially the weight training,” she says. “It was like a drug, of sorts. I needed it to survive, and when I didn’t have it, I felt physically and emotionally unhappy.”

At the same time, Brown’s persistent stomach issues forced her to reduce her fat intake and incorporate more whole foods such as fruits and vegetables into her diet. “The better I ate, the better my stomach felt,” she says.

By May 2010, the combination of exercise and better nutrition had made its mark. Brown realized her progress when she fit into a pair of pants three sizes smaller than she expected. “The 20 just fell off, the 18 was too big — the 14 fit. I’ve never worn a size 14,” she says. “Growing up, the role models I had were all overweight. I just always thought I’d be fat. To realize that wasn’t inevitable was amazing to me.”

The Road Back to Health

Thanks to strength training, P90X, regular Zumba classes and more healthful eating habits, Brown’s weight is 213 pounds and falling steadily; her waist is 34 inches, down from 42. Her goal is to reach 150 pounds by the end of 2012. She also plans to start a personal-training certification program and eventually work with overweight youth.  “I want to be a role model for kids,” she says.

And after years of feeling oppressed by dark feelings, Brown has finally left her depression behind. “I’ve discovered the power of eating better and exercising more as a solution to deal with depression, anxiety and illnesses. It’s brought me more confidence, happiness and inspiration. It’s been life changing.”