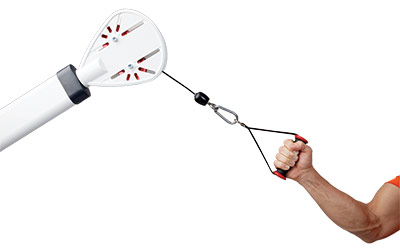 Work up a sweat and build strength in all three planes of movement with the dual cable cross machine.

For the most part, free weights have you covered when it comes to functional strength training: They allow you to move naturally, force you to engage stabilizer muscles, and let you work multiple muscle groups at once. But if there’s one machine that deserves a place in your workout, it’s the dual cable cross.

With arms that rotate to allow a full range of motion, numerous handles, and an accommodating weight stack, the cable machine lets you perform an endless variety of movements. In fact, if you’re not using cables, you’re missing out on some of the most effective functional exercises you can do, says Stephen Holt, CPT, a personal trainer in Timonium, Md. “Everyone should incorporate cables into their workout.”

The unique advantage of cables is that they allow you to manipulate your resistance in any direction, Holt says. “When you use dumbbells, you’re only working against the vertical vector of gravity. But when you move in real life, you also work against a horizontal vector, which cables allow you to do.”

Take, for instance, a chest press. To work your pecs with dumbbells, you need to be lying down to harness the force of gravity — but rarely in life do we lie down to push a heavy object. With a cable machine, you can perform a chest press while standing, a movement that is arguably more functional and more energy-demanding.

“What’s great about cables is that they let you do absolutely any exercise while standing up — and anytime you stand up, you’re using a lot more muscle mass. You’re automatically involving most of your core muscles,” says Holt.

Most movements on a cable machine can be performed on one side of the body at a time. This not only helps correct left-right imbalances, but it also forces your core muscles to work even harder to avoid rotating in certain exercises. In addition, it makes it easy to incorporate movement in all three planes: sagittal (forward and backward), frontal (side to side), and transverse (rotation).

When you perform a cable exercise that includes a one-arm or one-leg movement, you’re automatically working in all three planes, because when you’re not moving in a plane, you’re still using stabilizer muscles to resist movement in that plane. For example, if you’re doing a lunge, you are moving in the sagittal plane; extend your arm, and your core muscles also have to work to prevent your pelvis from rotating. By resisting rotation, you are also working in the transverse plane. “More planes means more muscle fibers working,” says Holt.

This workout, which he designed, can be performed two to three times per week, taking one to two days to rest between workout sessions.

Perform these four exercises in a circuit format, resting only to change the setup between exercises. Repeat the circuit three times, resting 30 to 45 seconds between rounds. You can do this workout on any dual cable pulley machine with adjustable arms. It’s possible to attach different types of handles to the ends of the adjustable arms on most cable machines. This circuit calls for a strap handle (which looks like the rubberized end of a bike handle) and a straight bar.

a. Adjust machine so that both arms are at their lowest setting and slightly wider than your hips. Attach a strap handle to each arm. Standing slightly in front of and between the arms, face away from the machine. Squat down to grab one handle in each hand. Rise to a standing position, bringing your hands just outside your chest, with palms facing forward.

b. Simultaneously press both your arms upward and slightly forward as you step your left foot forward, transferring your weight to your right foot.

c. Reverse the movement to return to your starting position. Then repeat the movement on the other side, again pressing with both arms but this time stepping with your right foot.

a. Adjust one arm of the cable machine so that the arm is just above the ground. Attach a straight bar to the arm.

b. Stand facing the machine with your feet at hip width, about 3 feet from the arm. Push your hips backward, bend your knees softly, and fold forward to grab the bar, using a two-handed overhand grip. Keep your back flat and your weight in your heels.

c. Drive through your heels as you rise to standing. Keep your back flat, abs engaged, and arms straight.

d. Slowly lower the weight by hinging at your hips as you fold forward with a neutral spine, but do not let the weight hit the stack. Repeat 10 times.

4. Alternate sides for a total of 14 total repetitions.

a. Adjust one arm of the machine to its lowest setting. Facing the machine and standing directly in front of the arm, fold forward and hinge at your hips to grab the strap handle with both hands. Drive through your heels and keep your back flat to rise to standing. Step backward with both feet until they’re wider than hip width.

b. Drop the handle from your right hand, holding it in your left hand with an overhand grip. With your left arm extended in front of you, squat down as low as possible while maintaining good form. Try to keep your torso upright and avoid rounding your back.

c. Pull the handle toward your body, rotating your wrist 90 degrees so your palm faces inward as you drive through your heels to stand.

a. Adjust one arm of the cable machine so that it is just above the ground. Attach two strap handles to the arm.

b. Facing the machine and standing directly in front of the arm, fold forward and hinge at your hips to grab the handles with two hands in an overhand grip. Drive through your heels and keep your back flat to rise to standing. Take two big steps backward and stand with your feet at hip width.

c. Step your right foot forward into a lunge, making sure your right knee stays aligned with your middle toes. Make sure to keep your torso upright. Your back knee should hover about 1 to 2 inches off the ground, but aim for as low as you can go with good form.

d. Push off with your right heel to return to the starting position. Alternate sides for a total of 10 repetitions on each side.

To make this workout more challenging, Holt recommends adding a full-body strength exercise (such as a power clean or burpee) or a metabolic-conditioning exercise (such as battling ropes or sprints) to the end of each circuit.

This article originally appeared as “May the Force Be Against Your” in the May 2014 issue of Experience Life.

It’s important to recognize that while cables are in some ways safer than free weights, they still require careful use to avoid injury. Personal trainer Stephen Holt often sees people get hurt while bending over to grab a handle before beginning an exercise. This action should be performed like a deadlift, with your hips hinged and spine neutral, using your glutes (and not your lower back) to do the work. The same applies for returning the handle after you’ve completed a set. For additional instructions, see exercise No. 2, Cable Hip Hinge.