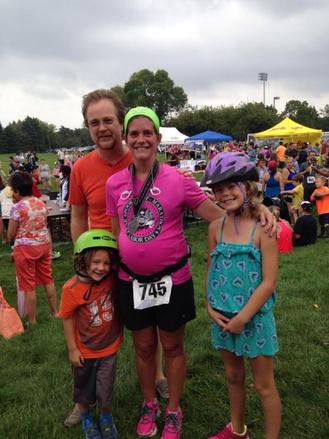 Considering I barely made it to 20 weeks before I stopped running during my last pregnancy, I was amazed when one of the moms in my running group, Maria Stathakis Ping, recently finished a half marathon at 32 weeks and 5 days pregnant. How did she do it? I was dying to find out, so I met with Maria, 38 (who also has two older children, ages 6 and 8), to hear her story.

N: Did you have any idea you’d still be running so far this late into your pregnancy?
M: I definitely hadn’t planned it, but it just kind of happened. Actually, the first trimester was the worst. I was so tired all the time— I’d run two miles and need to sit down.

N: So obviously you must have started feeling better. How was your second trimester?
M: The second was the best! I felt like myself again and running was great.

N: Did you have any pregnancy-related problems?
M: In May, I tried to do a half marathon and it was really disappointing. I was barely a mile into the course and had urine retention issues. My doctor said it was unrelated to running, and that the baby was just sitting weirdly, so I got the OK to keep running.

N: How about aches and pains?
M: I sometimes had [round] ligament pain, which went away if I just stopped and bent over. I also felt better if I wore a band to support my belly, but I realized that I could just use my fuel belt while running. It worked as well as the pregnancy support band.

N: When did you decide to sign up for the Oak Brook Half?
M: Six weeks before the race I had run a six-miler. I was actually thinking about doing the Magnificent Mile Half and thought, I could be ready for a half in six weeks, but I’m not going to sign up for anything. I’ll just unofficially train and see where it takes me. If I’m ready, I’ll sign up the day before. Then about a week before the Oak Brook Half, I won an entry for the race, and actually met the race director at Lively Running (the Oak Park store where the entry was raffled off).

N: What did your family think? Did anyone advise you not to do the race?
M: My husband started freaking out when I signed up.  But I did some research and talked to my midwife, and she just said listen to your body. If you feel you need to stop, stop.

N: As you got farther along in your pregnancy, did you make any changes to your running? How did you train?
M: I did two runs on my own during the week and a long run on Saturdays with a my running group (Best Foot Forward). I was really careful about hydration and safety. I wore a fuel belt with 20 ounces of water and did all of my solo runs close to home in case I needed to stop.  My routes were always planned based on bathroom locations. I also stopped running on trail because of the risk of falling and just the idea of being on my own in the woods. Although I actually did the Muddy Monk (5-mile trail run) in July, which looking back was probably a dumb idea.

N: What was your longest run leading up to the half?
M: I did 11 miles two weeks before.

N: Tell me about the race. What was your strategy for finishing it?
M: It was great. My friends and family were all there, so I had more of a cheering squad than I’ve ever had. I ran most of the course, but slowly. I walked all of the hills. I was extra careful about staying hydrated. My pace, including my water and bathroom breaks, was about 12-minute-miles, compared to my normal 9-minute pace. I finished in 2:38.

N: So how many times did you stop to pee?
M: I stopped at every aid station—there were seven—and used a porta-potty at every single one. I also drank water at every station.

N: Any words of advice for other pregnant runners?
M: Just listen to your body. Take it slow, and hydrate.

Maria is due to deliver a baby boy on October 22. In the meantime, she hopes to keep running, as long as her body is up for it!

Pictured above: Maria Stathakis Ping with her husband, Michael, daughter, Elliana, 8, and son, George, 6, after the Oak Brook Half Marathon on September 1, 2014.