WHY I HAVE A PROBLEM WITH THE WORD “FEMINIST” (EVEN THOUGH I AM ONE), AND WHY INTERNATIONAL MEN’S DAY IS NOT A JOKE 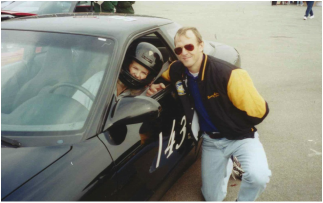 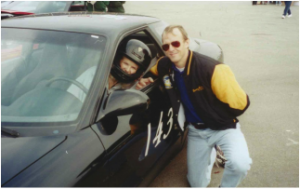 Thirty-one years ago, when my parents found out that they were having a baby girl, the first words to escape my dad’s mouth were, “She’s gonna be the only girl on the block with a go-cart.”

He had been hoping for a boy, but two daughters later, my dad had fully embraced his role of raising strong, smart, confident girls. He cheered for us during our soccer games, unofficially coached my track relay team during junior high, and in fact, did somehow acquire a go-cart. On summer nights, he took my friends and me carting in an industrial parking lot, where we raced around in circles, hoping not to be discovered. In high school, my dad taught me how to drive stick and took me autocross racing. He helped my sister fix up a yellow ‘67 Chevelle that she bought on eBay, spending hours under the hood of the car with her. He constantly bragged to his clients about our accomplishments in school and had full confidence that we would one day do something amazing. My sister and I grew up never expecting that our possibilities would ever be any different than our brother’s.

At the same time, I looked highly upon our mom, who stayed home with us throughout our entire childhood. She did an incredible job raising us and though she never wanted to be anything other than a mom, I always thought she was the smartest woman in the world. My parents had a wonderful relationship, and I saw their roles as homemaker and breadwinner to be choices, each of them doing the things that best suited them. I always figured that when I grew up, I’d do what best suited me.

I remember the first time I heard the word feminist in a context other than suffrage and the ERA. My fifth-grade language arts teacher, whom I loved dearly, had introduced us to the modern feminist movement. I loved the idea of women asserting their rights and fighting for equality, but I didn’t feel so comfortable calling myself a feminist. Most of all, I just didn’t like the word “feminism.” Like other “isms,” it sounded to me like an ideology of prejudice (racism, sexism) and power (elitism, nationalism). Feminism, I thought, should speak to equality of men and women. How could a word be about equality if it had such a strong connotation of separatism?

I understood that for thousands of years, my gender had been the underdog, that women have endured centuries of unfair treatment and that without feminists, we would not be where we are today. I knew that I certainly would not be playing soccer or racing a go-cart if not for these strong women. I knew that gender discrimination was still alive and unwell. I even recall being in P.E. class and doing nine chin-ups, determined to prove wrong a boy who had made a comment about girls not being able to do them.

I was a feminist, in the 11-year-old-girl sense of the word. Yet the word “feminist” left a sour taste in my mouth. It left me thinking that women were striving not for an equal playing field, but instead were deepening the gap between men and women. It was hard for me to see how feminism could be inclusive to men—why not come up with a word that means valuing both genders equally?

Tata and his boys

I continue to grapple with the word “feminist” today.

My husband comes across as a man’s man. He plays golf, watches football, likes his whiskey and cigars on occasion and has a man-cave filled with photos of Mustangs. Though he rarely lifts weights, his physique is the product of Polish farming genetics, and he speaks with a deep voice and Eastern European accent. He only knows how to cook bacon and eggs, and on the rare occasion that he decides to experiment in the kitchen, he ends up burning something that was not intended to be cooked (most recently a boom box). I could easily portray him as a stereotypical chauvinistic male. I could deepen the gap between us by highlighting the ways in which he falls short as a caregiver, or as many women do, refer to him as another child.

Or, I could list all of the things he does that are not seen as typical. He’s a wonderful father who spends almost as much time and energy as I do with our boys; he advises teenagers as a high school guidance counselor, under a female boss and in a mostly-female department; he loves musicals and classical music and has exposed our boys to both; he organizes play dates, does dishes, folds laundry and handles all of our finances. We both work, and he sees my career to be equally important to his. The other day when Dariusz was sick, he took a day off work to care for him, while I spent the morning training clients. It would be wrong to act as if I somehow have the short end of the stick in our relationship.

Sunday, March 8 was International Women’s Day. I honestly was not aware that such a day existed until Darek brought home roses, tulips and rosemary (he knew I’d be most excited about the plant I could eat). I like to periodically give a shout-out to my husband, so I posted a photo on Facebook, with the caption:

“Not gonna lie: I actually had no idea it was Women’s Day until Darek brought home all of these for me. Yeah, he’s a keeper. Btw, anyone know if there is a Men’s Day?”

As I was writing my post, I had this feeling that it would attract controversy. I did genuinely want to know whether such thing as Men’s Day did exist, because I think it’s important to recognize the men in our lives. But I knew that posing the question would come across to some people as either a) naïve or b) anti-feminist. Of course, I did get a few responses informing me that of course, every day is Men’s Day. And I totally get it. There are plenty of men who expect their needs and desires to always come first. From a historical perspective, I absolutely see why having a Men’s Day once would have been ridiculous. However, I don’t think it’s fair to assume that in this present-day, men do not deserve to be recognized.

I did a little research and found that in fact, Men’s Day does exist. It was created in 1992 and is celebrated in more than 70 countries each year on November 19.  Click on the link to the website, https://www.internationalmensday.com, and you’ll see a photo of a dad holding up his baby (not a bunch of men playing golf and smoking cigars).

“Working together for men and boys” was last year’s theme for the day, which focuses on “men’s and boy’s health, improving gender relations, promoting gender equality, and highlighting positive male role models.” According to organizers, “It is an occasion for men to celebrate their achievements and contributions, in particular their contributions to community, family, marriage, and child care while highlighting the discrimination against them.”

I know a lot of hands flew up in the air while reading that last line. I don’t want to stray too far off topic here, but I do think we ought to consider whether we are giving men equal opportunities to participate in parenthood. Until employers recognize paternity leave and allow fathers to work from home or take a day off to care for a sick kid, we still have a ways to go in terms of gender equality. When we act like these are solely female issues, we create an even bigger gap between men and women. Going back to the word ”feminist,” it’s easy for my husband to say that he supports gender equality. It’s certainly more challenging for him to label himself as a feminist.

My dad, who passed away just after I graduated from college, was one of the most influential people in my life. Without him, I never would have been the girl with the go-cart who went on to be a confident, successful businesswoman. My husband is my partner. Without his support and respect (and health insurance, thank you very much), I would not be able to balance my career and family life. When it comes to my two boys, I hope that they will not grow up feeling guilty about their supposed natural advantage over women, but instead believe that both men and women can be strong, smart and balanced.

Yes, I am a feminist, but can we please come up with a new word?