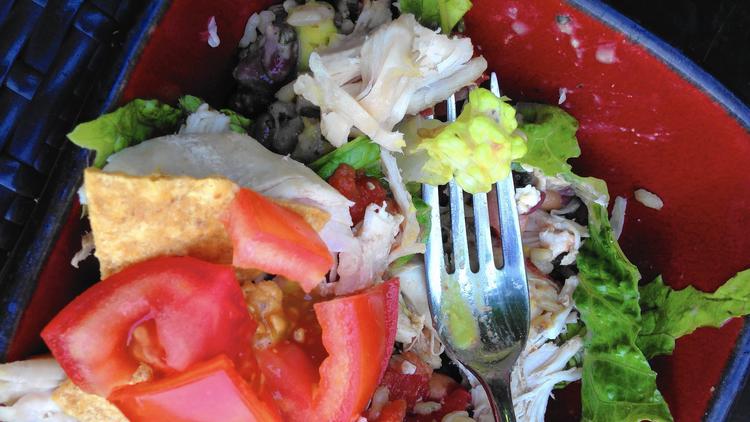 So lazy, in fact, that you probably shouldn’t even call what I do “cooking.” My husband has suggested “assembling” as a more appropriate word. Yes, I assemble meals – often quickly and haphazardly. I regularly pull things out of the freezer, use a microwave and sometimes even use (gasp) processed foods.

But before you envision me eating TV dinners while my kids chow down on mac ‘n’ cheese, allow me to say a few words.

My family eats pretty healthily. Our house is always full of fruits and veggies, and I’m a big proponent of eating foods in their natural state. I’m also a proponent of spending minimal time in the kitchen, especially in the summer. I don’t believe you need a lot of time or money to prepare nutritious meals. I do believe it helps to be resourceful, scrappy and open-minded. I also think you need to cut yourself a little slack when it comes to feeding your family organic/whole/fresh/etc. foods.

I’m proud to share my lazy meal-prep hacks, as well as some great ideas suggested to me by other moms. Warning: If you enjoy cooking, if you adhere to any specific dietary restrictions, or if you use the word “marinate” on a regular basis, these tips may not be for you.

• Take advantage of store-cooked rotisserie chickens. I have bought a chicken from Costco nearly every Thursday for the past six months. Thursday’s dinner is almost always chicken, frozen mixed veggies and brown rice. (Yes, we eat the same thing every Thursday. So what?) The next day, the chicken gets repurposed in whatever I feel like using it for: chicken sandwiches, salad, tacos, stir fry, etc. The possibilities for leftovers are endless.

• Upgrade freezer food. Have you ever realized there was nothing to eat in the house and resorted to feeding your family a frozen pizza? Frozen pizzas may scream “junk food,” but they actually have health food potential. I like to go through the fridge, take out whatever leftover veggies I can find and add them to the pizza before I put it in the oven. By the time I’m done assembling, the pizza is so loaded with healthy stuff that it could pass for a salad.

• Makeover takeout. We like to add our own frozen stir-fry veggies to restaurant Thai food to make it more veggie dense and stretch each entree out for two meals. We’ll do the same thing with Chipotle: Order a burrito bowl, split it in half and then add lettuce and tomatoes to make two hearty salads.

• Simplify with sandwiches or wraps for dinner. Or cold cuts and crudites. Or random items in the fridge that are nutritious. No one’s telling you your cooking has to fall within the “entree” section on the menu.

• Swap chicken thighs for chicken breast. They’re so tasty on their own that you’ll never have to marinate chicken again. We like to throw a whole bunch on the grill and then have leftovers to eat plain and in other chicken dishes.

Here are some tips from some other mamas:

“I toast tortillas and then top with refried beans, guacamole, lettuce, olives, tomato, cheese, sour cream … basically a seven-layer dip on a tostada. So easy and I feel like my kids are getting what they need – protein from the beans specifically because they don’t really love meat dishes – and it takes zero time to prep (four kiddos, like I have time!).” – Tory Patrick, Oak Park

“I chop up three heads of romaine and put it in a big round snap-and-go container. Then I can just dump some in a bowl and add whatever veggies I want, and some protein, and I’m good to go.” – Ann Bath, River Forest

“I have teens now but when they were little, they invented ‘the splatter platter.’ I take out a plate for each of us and place about six or seven small piles of things on the plate and call it a meal. We eat pretty healthy, plus enjoy sweets, so that might include: a few beet slices, a scoop of rice pilaf, banana slices, a boiled egg on a piece or two of spinach, half a bagel with jam or cheese, hummus, carrot slices, seeds, sliced meat and some applesauce. And I always include something yummy like a few cookies or half a muffin. Or ice cream afterward! If anyone is still hungry, they eat a bowl of cereal or make toast. I don’t spend more than five minutes on dinner, as I walk in the door and just want to spend time with them and not mess about in the kitchen. So then we all pile on the couch and watch ‘Glee’ re-runs and eat our splatter platters. I think they called it that because it looks like I just splat everything on a plate.” – Susie Donohue, Oak Park

“My go-to is leftover rice with whatever veggies are in the house and chicken, stir-fry style with a bit of Braggs Aminos on top.” – Angie Grover Abraham, River Forest

“I like to keep cooked (grilled if it’s possible!) chicken in the freezer. I can make tasty sandwiches with it, put it in salad, or mix it with pasta and pesto. I also like to cook up a lot of ground beef with taco seasoning and use some for taco chips or taco salad, then freeze the rest for future use.” – Heather Brzek, Berwyn