Mama’s Gotta Move: If our single socks could talk 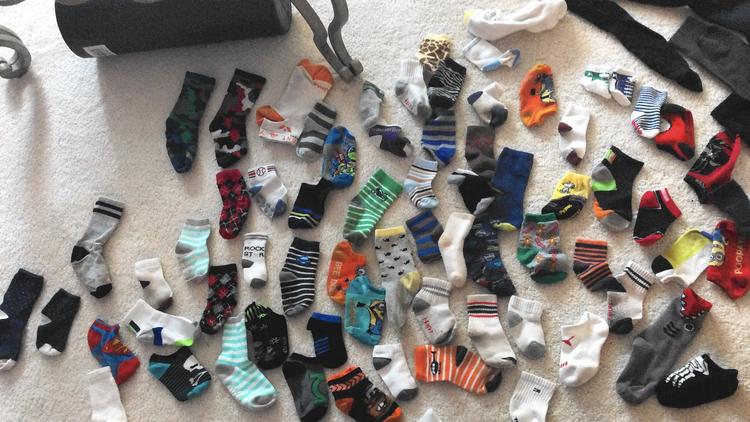 The other day I found myself immersed in a conversation about stray socks in a local mommy Facebook group. One mom had posted a picture of her overflowing matchless sock basket: “I have a single sock epidemic. This is bananas. Anyone else?”

If you can relate, this story is for you.

In the master bedroom of a modest suburban house, a woman, “Mom,” peers over a laundry basket.

Mom: This is ridiculous. There have got to be at least 30 socks in this laundry basket and I can’t find a single pair. I swear, I should just throw these out and start over.

Gray sock: Hey did you hear that? She said she’s gonna throw us out if she can’t find our match. SHE’S GONNA THROW US OUT!

Black sock: Yeah, I figured that day would come. It’s about time. I’ve been sitting in this crowded laundry basket for months. There’s no way anyone out there is looking for me.

Gray sock: You can’t talk like that! Just the other day, Blue Balega got hitched.

Black sock: Yeah but the boss was actively looking for a match for her. She’s a designer running sock. I’m just an ordinary sock from Costco.

Gray sock: You’re a Costco sock? Do you know how lucky you are? I bet there are, like, five solemates out there for you! I wish I were polygamous like you.

Black sock: Being polygamous doesn’t do you any good when you’re the only one. I’ve already lost three potential matches who were too holy.

Kid sock (interrupts): Do you think I’ll ever find my match again?

Black sock: Ha, have you seen how those kids treat their socks? Flinging them behind the couch, taking them off in the car, stuffing them into that abyss of a toy box … by the time she finds your match, their stinky feet won’t fit you anymore. You’ll be lucky if you make it to Goodwill.

Mom (from the other room): Boys, get your socks and shoes on! We need to leave for school.

Mom: Let me go see if I can find them.

Mom: How’s this – one Batman, one Superman?

Kid sock (watches in awe): Did you see that? Batman and Superman haven’t seen their matches in months and they just got picked up as a pair. There’s hope for all of us!

Black sock: Maybe for YOU, but have you ever seen the boss wear two different socks? Not gonna happen. In my younger days, I practically threw myself at her feet and she tossed me aside like a wet sock.

Gray sock: I know my sole mate is out there. I can just feel it. She probably escaped this mundane world through a vent in the dryer and is on an exotic vacation, airing out in the sun. She’ll be back someday.

Black sock: She’s probably inside out at the bottom of a stinky gym locker, gasping for air.

Purple sock: Hey did you guys hear about the lingerie bag? Word on the feet is that the boss’s mom paid a visit. She bought the boss a mesh bag with a zipper that’s supposed to keep us all together. All the boss has to do is put us inside as soon as she sees one of us on the floor, and we won’t get lost in the wash anymore. We all go in and come out together!

Gray sock: Well that sure is news! Such hope for the next generation! But do you think she’ll actually use it?

Kid 2 (to his brother, holding up lingerie bag): Look what I found! A new place to hide our secret treasure. It had socks in it, but I dumped them out so it could be a spy bag.

Black sock: And there’s your answer.