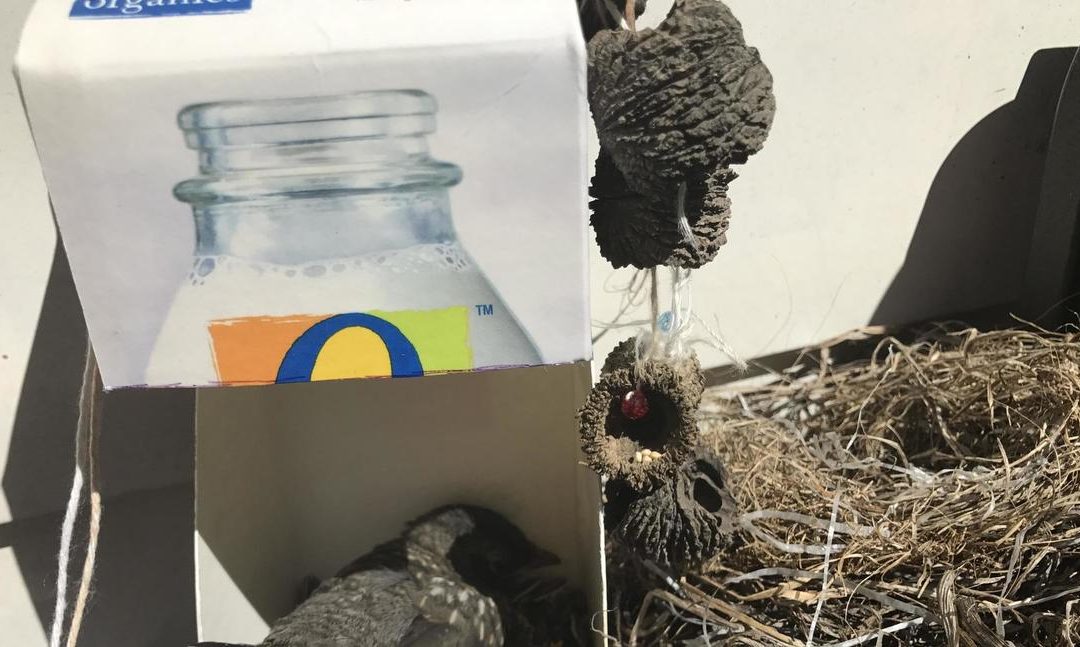 I told them she flew away.

My boys found her on the side of the road on a walk. She was still moving, but unable to fly or walk. They insisted we help her, so I scooped her up with a piece of cardboard and we wheeled her home in the bottom of the stroller.

Conveniently, we happened to have a spare bird’s nest (fallen from a neighbor’s tree) in our backyard. Excited to give their new friend a home, the boys placed her in the nest and my younger son brought out a bird feeder he had made in Sunday school. The boys watched for the next 10 minutes or so, bringing out a little bowl of water and trying to get the bird to eat and drink. The bird hobbled into the bird feeder (an empty milk carton) and lied down, but didn’t do much else.

Then we took a break. My little guy went down for a nap. The 5-year-old accompanied my husband to the store. I went inside to procrastinate putting away laundry.

An hour later, I checked on the bird. She was lifeless. I texted my husband:

“Don’t touch it. Put it in a plastic bag and throw it out.”

But not yet. I would wait for my boys to return and share the sad news, I decided.

My husband came in the door first and saw the bird, still in its resting place. “You didn’t get rid of it.”

“Why? Just tell them it flew away. Let them think their good deed paid off and they saved the bird. Give them a happy ending.”

“No! I’m not lying to them! I’m telling them it died,” I said. I don’t like lying to my kids, and I especially don’t like sugarcoating the realities of life.

I didn’t say anything and went upstairs to check on my little guy. Still asleep. Five-year-old was playing in the yard.

And then it hit me – the reason my husband wanted a happy ending. His father is dying. It’s a matter of weeks, maybe days now. The doctors have told us there’s nothing else they can do for him.

Under normal circumstances, this bird would have taught my kids that not everything in life has a happy ending. We’d have had a proper bird burial in the backyard, talked about how we did our best but sometimes it’s not up to us. We would have answered the “why’s” about what happens now, and what made the bird die.

Their grandpa’s impending passing won’t be my kids’ first encounter with the death of a loved one. They already know death far too well. My uncle died earlier this year, and my grandpa passed away back in December. In his tiny 5-year-old lifespan, my older son has also experienced the death of his godfather (my late-brother-in-law) and two additional great-grandparents. Our family has been through all of the grieving, the questions, the rituals of closure. They’ll be there again soon. There’s no need to mourn a bird.

I came back downstairs. “Babe,” I said to my husband “You can get a plastic bag.”

Note: Romuald Radziszewski, the author’s father-in-law, passed away on May 17, 2017.