Lessons from a complicated pelvis 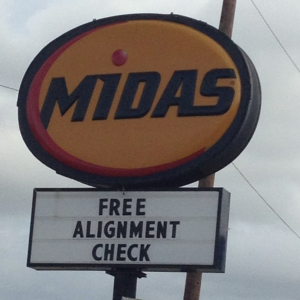 The other day while I was driving to a physical therapy appointment, I passed a sign that read “Free Alignment Check.” Of course, the service was for cars, but I found myself thinking, “Man, if only pelvises were as simple to re-align as wheels.”

If there’s one thing I’ve learned over the past few years, it’s that pelvises are complicated. Really complicated.

I’m using this post to share what I’ve learned on my personal journey with pelvic health. I’m sharing because I believe in being open and honest, but also because maybe my story will be helpful to someone else.

I’ll rewind a bit. Three years ago after my second son was born, I dealt with mild stress urinary incontinence. I learned, through self-study and from taking courses with women’s health experts, some general tips to improve function of my pelvic floor and other core muscles. I learned how to implement piston breathing and “blow before you go” (Julie Wiebe) into my daily life and workouts. I worked on keeping my ribs over my hips and my tailbone untucked. I also saw a women’s health PT who diagnosed tightness on the left side of my pelvic floor and recommended some external stretches to help. I did everything I knew of to get my body in a better place, and my symptoms improved. I could do most anything: run, jump (as long as it wasn’t fast and repetitive like double unders), lift heavy things, and sneeze (as long as it wasn’t more than three times in a row) without any leaking.

But my pelvic floor never made a full comeback.

In fact, recently, after having surgery to remove an ovarian cyst, some of my symptoms worsened. Here’s a look at some of the reasons why, and some helpful lessons I’ve learned along the way.

Lesson 1: Alignment matters. And it’s more than just “neutral spine” and “ribs over hips.”
If you’re lucky enough to have a symmetrical pelvis—that is, your left and right side line up perfectly without one side being higher and/or more forward than the other, general alignment cues combined with training your deep core muscles may be enough to restore good pelvic floor function and. But what happens when your pelvis is “off”?

I have known for some time that my pelvis rotates anteriorly on the left side. A year ago, I learned that I also have minor scoliosis of my thoracic spine, which curves to the right just at the middle of my back. It’s hard to say what caused what—did my rotated pelvis lead to the curve in my spine, or did my scoliosis lead to a rotated pelvis—but what matters now is that my alignment is off.

If you have issues with your alignment, chances are, you’re going to have issues with your pelvic floor and the rest of your deep central stability system. When one side of your pelvis is lower than the other, the pelvic floor muscles on this side are automatically in a disadvantaged position to generate tension, and over time, they can become weak. No matter how much I trained my pelvic floor, as long as my pelvis stayed misaligned, the left side would always remain dysfunctional. 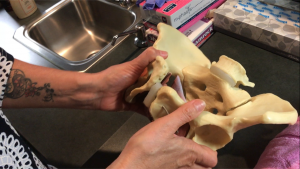 Lesson 2: Surgery is a major ordeal, no matter how “non-invasive” the doctor claims it to be. Also, a 9cmm cyst is a big freaking deal.
Last winter, I started having some unsettling pelvic symptoms: the frequent sensation that I had to pee (urge incontinence), low back pain and pelvic tightness. An ultrasound confirmed that I had a 9cm cyst on my left ovary. A couple of months later, I had laparoscopic surgery to remove it. I was under the impression that I’d walk out feeling fantastic without this foreign object in my abdomen.

Instead, removal of the cyst brought on a whole new slew of problems. In order to remove the cyst, the surgeon made three holes, each of them penetrating through multiple layers of muscle and fascia to get to my ovary, resulting in trauma to these muscles and leftover scar tissue. The cyst’s sudden non-existence in my abdominal cavity resulted in a repositioning of my internal organs, which had gotten used to sharing space with a softball-sized blob.

On its own, the cyst’s removal may not have been enough to cause any major problems. But if there’s one thing I’ve learned from my body, it’s that trauma tends to unearth and magnify issues of your past.

Lesson 3: If something doesn’t feel right, get a second opinion. And maybe a third.
When I came out of surgery in May, all of this baggage—the scar tissue and other visceral implications of removing the cyst, my scoliosis and rotated pelvis, my tight left pelvic floor—made me more vulnerable for dysfunction. Instead of feeling better with the cyst removed, I felt like a train that had just derailed.

I decided to go back to physical therapy, but this time to try someone new. I first sought help from a PT who practices functional manual therapy, to see if she could help my get my body re-aligned. Initially, I was seeing results and I could get my pelvis to line up almost perfectly, but it kept defaulting to its usual position: anteriorly rotated and lower on the left side. We surmised that I needed to get my left side core muscles up to snuff, but they weren’t responding to exercises as well as they should have.

So I made an appointment with a different PT who specializes in internal pelvic floor work. I’d already been assessed by two different pelvic floor PTs, but something was telling me that I needed another opinion. This PT performed a pelvic exam and found that in addition to left pelvic floor being tighter that the right, I have atrophy and possibly partial avulsion of my levator ani (pelvic floor muscle) on the left side. Most likely, this is a result of second degree tearing during labor three years ago. I knew about the external tearing, but no one had ever diagnosed damage to my pelvic floor before.

If you feel like something is “off” in your body, it probably is. YOU are the only one who knows how you feel. In the past three years, I’ve had a doctor, two different midwives, and three physical therapists assess my pelvis. And it wasn’t until the THIRD PT that anyone told me I had a damaged pelvic floor muscle. 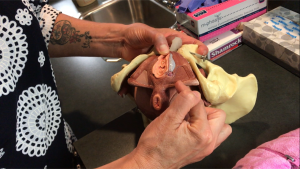 Lesson 4: Put the pieces together, or find someone really, really smart who can help you do this.
What I know now is that I have right thoracic scoliosis, an anteriorly rotated left side pelvis, damage to my left levator ani muscle which has caused both tightness and weakness, and weaker left-side abdominal muscles.

The reason I had never been able to “fix” myself was that I wasn’t putting all of the pieces together. I know now that I need to correct the rotation at my pelvis, but I also need to address the damage to my pelvic floor—manually releasing tight areas and training weak areas to respond and get stronger.

I have a lot of work to do! But I’m thrilled to finally know what needs to be done and to have a team of experts who can help me find balance and function again.